Here’s what I learned today:

Apparently, the entire purpose of supervised Machine Learning is to try and predict an output given (one or more) inputs.

In the examples I followed, Andrew took the case of housing prices. His imaginary friend, James, wanted to sell his house and came to Andrew asking for advice. What he then did was look at a bunch of different factors (e.g size of the house) and the impact this had on the price of the house.

There’s a couple of important definitions to note here:

Let’s talk abit more about point #3 above, about the hypothesis \(h\). Essentially, if the relationship is linear (Andrew promises to tell us later how to get the best possible fit, linear or otherwise), then the relationship takes the form of:

This looks kinda similar to an equation I remember from school:

That’s the straight line formula, where \(m\) is the gradient/slope, \(c\) is the y-intercept and \(x, y\) are both coordinates of any point on the line. It’s clear, just by comparing the two, that \(\theta_0 = c\) (the y-intercept) and \(\theta_1 = m\) (the gradient/slope). In general, we call these \(\theta\) things parameters of the hypothesis (so we don’t have to call them theta things the whole time).

The bottom line is this: if we know (or can somehow calculate) what the parameters (\(\theta_0, \theta_1\)) are, then we can predict the values of \(y\) given \(x\).. all without even needing a crystal ball!

For our purposes, we’re not supposed to dig too deep into this just yet. Things get icky pretty quickly when you add multiple \(x\)’s, and higher order hypotheses (like quadratic equations, cubic equations, etc.).

Let’s not worry about all that just yet .. and focus on getting this darn thing to work with the most basic case first.

The total number of rows (or pairs) of training data is called \(m\), and we’ll be using that a bunch of times in our calculations.

Now, our job, as mentioned earlier is to find a relationship that connects our features (\(x\)’s) to our predicted value of \(y\).

We’ve now got a bunch of points, and we’re trying to predict the \(y\) value given an \(x\) .. you can probably already see where this is going .. we need to find the line of best fit.

Finding the line of best fit

Calculating the line of best fit is pretty easy to do, visually (see my hand-drawn masterpiece below). 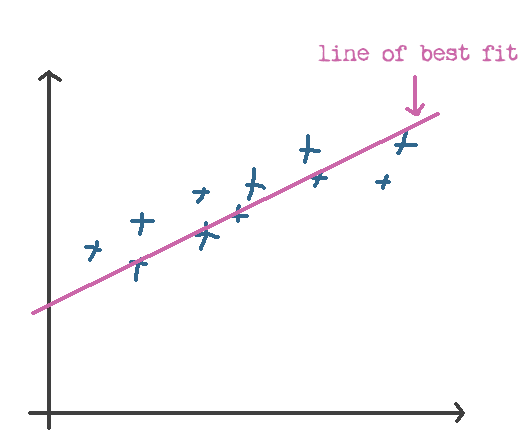 When you try to do it in math though, the equations can end up looking pretty scary. The concept however is a simple one.

To get the line of best fit, you first need to define what “fit” means .. in our case, this means calculating some sort of figure that allows you to differentiate a “good” fit from a bad one.

We call this the cost function. To find the cost of a particular hypothesis, all you really have to do is calculate how often the hypothesis is able to predict the output correctly. If all the predictions are 100% spot-on, then it has a cost of zero. If the predictions are crap, it’ll have a high cost. Bottom line is, we’re trying to optimize for cost – the lower, the better.

Here’s how we can calculate the cost:

I’m not entirely sure why the cost function uses the symbol \(J\) (I would’ve personally used the symbol \(C\), since you know, it’s a Cost function .. but maybe it was already taken or something).